Earlier today, we shared with you the best content from Greenhouse Open.

But surely you didn’t think that was it, right? Here is a second helping of the best-of-the-best insights and thought leadership from the event. Enjoy!

A core takeaway from members of our “Performance Hiring at Different Stages: People Metrics & Analytics” panel is that transparency in all relationships is key. Specifically, this means actively compiling and vocalizing your People data (read: recruiting and other People-based KPIs) to the executive team. Lauren Ryan, Director of Talent Acquisition at Greenhouse, further notes that it’s important not to overwhelm the team, otherwise there will be a lack of focus on which areas need to be addressed. Her tip is to select one piece of data per quarter and present it, along with an actionable plan on how to continue its success or how to improve it. One attendee noted the significance of presenting an actual deck and walking the team through the findings AND the proposed follow-up plan, via this quote from panel moderator Kyle Lagunas, Principal Analyst at Lighthouse Research:

In addition, the panel came into agreement on the need for more proactive transparency in recruiter-hiring manager relationships. We learned that only 23% of recruiters are sharing information with their hiring managers! A high majority, therefore, are left in the dark. The solution is to set expectations with hiring managers so that there’s zero confusion or misinterpretations. By being more transparent, the experience changes so much and this happens without the recruiting team really having to change anything (work-wise) at all! It’s just the perception, therefore, that’s changing. If hiring managers hear from you more often and know where you’re at during every step of the way with an open req, then they will feel like more is being done and that their role is being treated as a priority. If you don’t communicate with them—even if you’re still working hard on their role—the perception is that you’re not doing your job or caring about them and their needs. More communication is thus a quick fix to achieving a stronger recruiter-hiring manager relationship.

Jon Stross, Co-Founder & President of Greenhouse, revealed to the audience that Greenhouse Onboarding, our onboarding optimization platform, had officially launched! (Click here for more information). Jon explained that onboarding is a natural progression from recruiting and hiring but that it is seldom given the attention it deserves, considering how important it is to the health of a company’s levels of employee engagement and talent retention. In many companies, onboarding consists of HR paperwork and tax form completion. But conference panelist George LaRocque, Founder of LaRocque and #hrwins, captures Jon’s declaration that there’s much more to it: 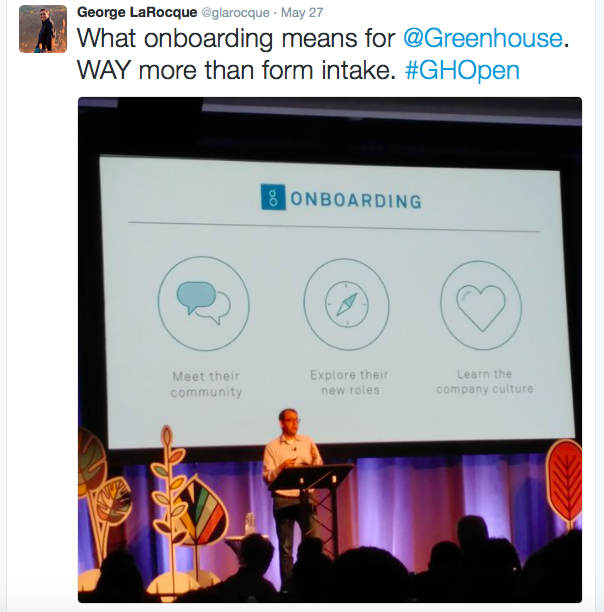 Building a new people culture: How to become a change agent

The main discussion in our “Building a New People Culture: How to Become a Change Agent” session was how to drive behavior change in your organization. Our panelists agreed that many times, we’re guilty of repeating ourselves over and over again, almost begging people to listen and be eager participants in an organizational change that needs to take place. But this broken-record approach tires employees and makes them less willing to listen and follow through. To combat this, the suggestion is to enlist the help of executives and other key stakeholders to spread the message for you (read: you’re not alone in this!). Strategically think about who in the company the message should come from, and then have them deliver it. The more people involved (instead of just you or other members of your People Team), the more the message will be heard and the change, accepted.

Cara Brennan Allamano, Director, People Team at Planet Labs, notes too that iteration is key. Change is inevitable, but if you can position it as a way of iterating on previous programs and methods that need improvement, then your audience will be much more willing to participate. Therefore, there’s a real positive purpose to the change—and this is what people so badly want to hear. This approach especially works well in growing organizations, Cara explains, as more people naturally want to be educated and improve and help the company be the best it can be.

Hiring trends: 2016 and beyond

One of the main takeaways from our “Hiring Trends: 2016 and Beyond” breakout session was that companies must now direct their focus to bringing in talent based on traits, not on hard skills. The key is to hire those who think and add value in innovative ways. Why? With our fluctuating economy, the future is unpredictable, and in tough times, you will need people with perseverance, grit, and the ability to flourish. Panelist Cortlin Handly, Talent Strategy Director at Accel Partners, put it this way:

What candidates really think of you

We ended the conference with a real treat—the “What Candidates Really Think of You” panel, hoping to give our recruiter audience a better idea of which approaches and tactics they should—and shouldn’t—employ to attract (and sign!) top talent to their companies. The greatest takeaway from our panel of four (very candid) new hires & job seekers is that candidate experience truly is the most important thing affecting their perception of your company—and candidates are taking notice of every last thing you do to either show them a bad one, a good one, or a great one. Make a bad impression; lose great talent. It’s that simple.

On that note, our panel shared stories of past encounters with companies that left much to be desired. We learned that candidate experience starts all the way at first touch. One candidate declares forced fake connections in InMail messages (“Hey, I see you like volleyball, too.”) as the ultimate turn-off. He is more compelled by recruiters who don’t try too hard and instead lead with more information about the company, including its mission, its values, and what he can learn and become there. A second candidate chimed in, saying that she was turned off by the lack of diversity in the interview process, exclaiming that the job she finally accepted after numerous interviews was from the only company that had her meet with a woman.

Another candidate specified the necessity of structured interviewing and how it doesn’t just benefit the company, but also the candidate:

So if you have been committing any of these faux pas, now’s the time to change if you want to stay competitive in the market. To attract the best, you’ve got to show you’re the best—and really have your people’s best interest at heart. Remember, from the candidate’s perspective, candidate experience runs in parallel with employee experience. 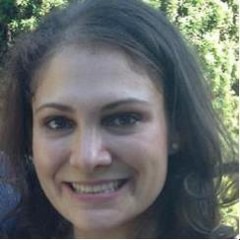