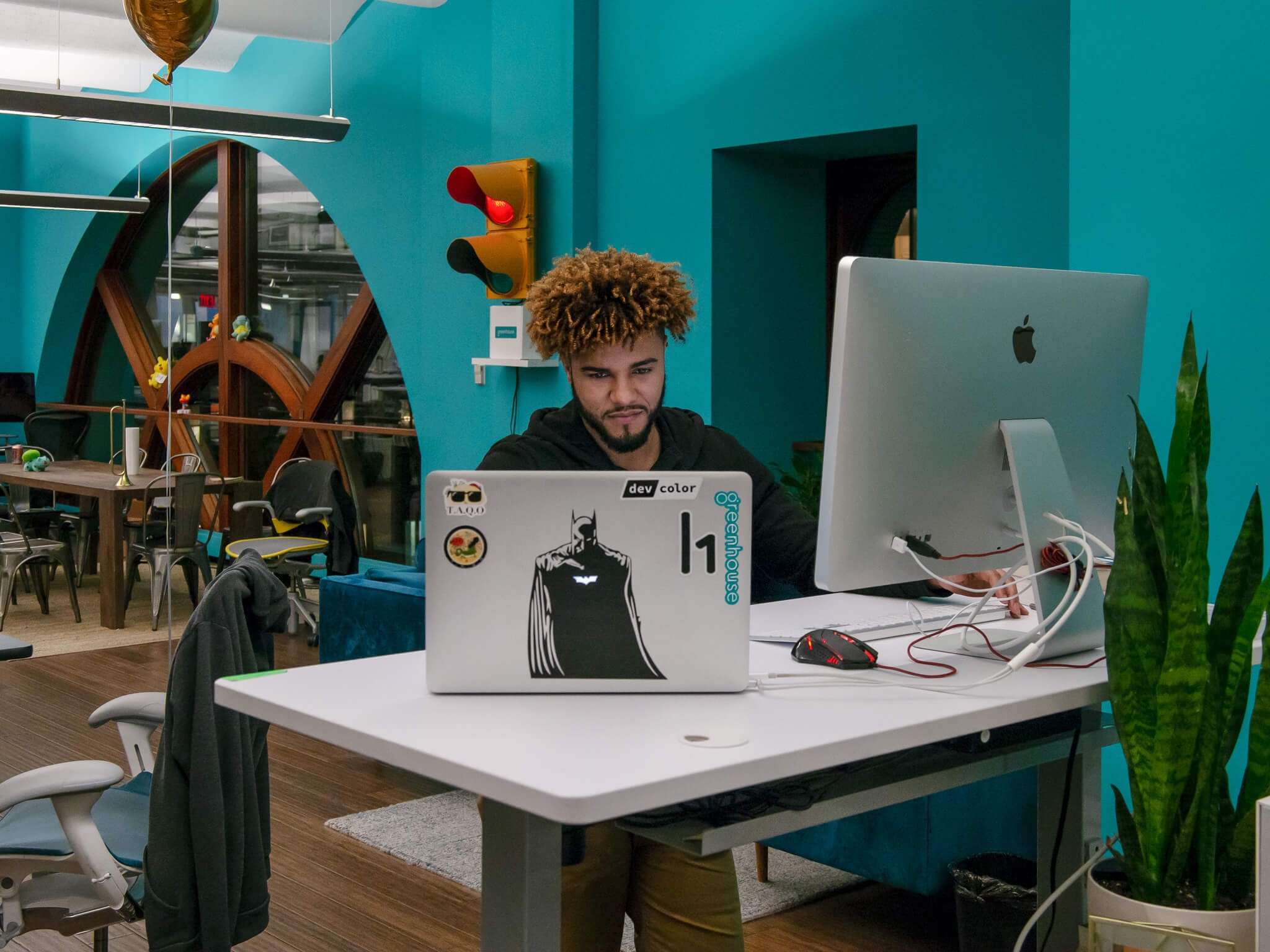 Many sales professionals follow a similar path. It generally involves starting out as a Sales Development Representative, moving up to become an Account Executive, and then going on to becoming a Manager, Director, or VP of the department.

But Lauren “LV” Vicknair’s career trajectory has been anything but typical.

After working in sales for nearly a year, he decided to change directions entirely and joined the Greenhouse Engineering team. After over a year as a QA Engineer—and lots of self-study and extra hours—he recently made another transition to the Security team. We caught up with LV to learn about his early days at Greenhouse, what it was like to switch from sales to security, and why some people insist on calling him “Lorenzo Vespucci.”

LV: I worked at Quiznos. I ate way more than my paycheck per week in sandwiches.

GH: Sounds like a pretty good deal for you! I know you studied Business Administration and Management in college. At the time, did you know what you wanted to do after you graduated?

LV: I’m still trying to figure that out! I went to USC solely because I wanted to go there. I grew up down the street and it was all I knew. I heard they had a good business school, so I decided to do that. It was all pure happenstance ending up where I did—well, that and being unafraid to take risks.

GH: Tell us about your journey to Greenhouse. How did you find out about the company and what was your application process like?

LV: At my previous job, I had been paired with a mentor, and he sold me on the idea that I was young and could take a risk at a startup. I was excited by the adrenaline of not knowing what was going to happen, the intimacy of working in a non-corporate environment, and the idea of putting on multiple hats rather than just being an ant in an anthill.

The feeling and atmosphere at Greenhouse was what sold me. There was a warmth that I felt, walking in, seeing people interact with each other, and during the interview process the people who interviewed me made me feel welcomed. When I left the interview, I was like, ‘That’s where I want to work.’

GH: You started on the sales team, then moved to QA Engineer, which is not a very common transition. What prompted the shift from sales to engineering, and how did you go about doing it?

LV: At the time I joined, we were super small—around 20 employees—and we didn’t have a lot of processes in place. I was doing well on the sales team, but after a while, I felt like I might be ready to take on a new challenge. I talked to our recruiter about it and she mentioned there might be some roles opening up on other teams. Then our VP of Engineering approached me to let me know that there was an entry-level role as a QA Engineer on the tech team and if I did well initially, they’d support me with bootcamp, extra classes, anything I needed.

The interview process was really just trial by fire. Another team member had just started, and they basically sat me next to him and said: 'Do what he says. Do a good job.' I did that for about a month and I guess I did okay because I was able to work my way up from Manual QA to more Test Automation and Programming, and now I’m here on the Security team.

GH: Tell us a bit more about your current role as a Security Engineer. What does that involve and what is a typical day like for you?

LV: It’s basically keeping the bad guys out: keeping our data secure and making sure our customers’ data is secure and no one can do anything evil. We also make sure we’re being smart internally and not exposing ourselves to any danger.

A typical day involves a lot of monitoring, identifying, and fixing vulnerabilities, and promoting all-around security awareness for the company. We have to be up-to-date on the latest security vulnerabilities and attack vectors to ensure we are safe. We’re also working on automating a lot of things so we can cover more ground. Things are constantly changing, so we always need to be on our A game.

GH: You’ve been at Greenhouse more than three years. How has it changed during that time?

LV: The growth and the scale—we went from all being in one room at one time to spreading out over multiple floors. I’m appreciative that I’ve seen a startup at so many stages, from getting rounds of funding to hiring 6 or 7 people a week, to experiencing some lulls. It’s been a roller coaster ride, but it’s still on the way up.

The core values of freedom and respect have stayed the same, though. I feel like my individuality has never been constrained here, and I feel emboldened to speak my mind how I want to.

GH: Tell us about TechYes!. What is it and what has your role been with it?

LV: I’m one of the co-organizers along with a number of people from Greenhouse. We wanted to build an ecosystem of like-minded individuals in the tech world who are pushing for more inclusivity and diversity. We’ve been doing TechYes! for over 2 years and have organized 12 or 13 meetups—fireside chats, panels, workshops, etc. We’ve worked with partners like 2020Shift, Jopwell, and the New York Times.

GH: We’ve seen you around the web with various pseudonyms. What’s the story behind your numerous monikers?

LV: My name is Lauren Vicknair, but I go by "LV," so people don’t always know what the "LV" stands for. Sometimes I have a little fun with this. As the tale goes, Glassdoor had interviewed me for a video they were doing, a company profile on Greenhouse, and they pulled the names from Greenhouse Onboarding. And me, being the jokester that I am, I had changed my name in the system to "Lorenzo Vespucci," so that was what got published on the video and shared out all over the internet.

And even now people that get hired will come up to me and say, ‘I saw you in the video, hey Lorenzo!’ And even on my bobblehead, it says ‘Lorenzo Vespucci,’ so I think that’ll be a tall tale to go down in Greenhouse history. [Editor’s note: All Greenhouse employees receive a customized bobblehead on their third anniversary of working at the company and the bobbleheads are proudly displayed in each of our offices. Some employees consider it the most compelling retention plan.]

LV: My recent shift to Security Engineer took about a year and a half from when the idea originally came up to when I moved into the role. I took classes, studied outside of work, stayed late, came in on weekends, and was really grinding to learn this stuff. And it happened. I had to prove to our team lead—who is basically like Yoda—that I could do it. It speaks to a lot of good qualities at Greenhouse—we give people opportunities, we reward hard work, and we take risks on people. I think we do a good job of hiring people who are versatile and flexible.

On the personal side, I’m from LA originally, so the majority of my friends here are my coworkers. I have a coworker who shares my birthday and for the past three years we’ve done a combined birthday celebration. Of course we went to karaoke; that’s a Greenhouse tradition.

GH: So now that you’ve mentioned karaoke, we have to ask about your go-to song.

LV: Prince. “Call My Name” and “When Doves Cry”. And I really like Elton John’s “Rocket Man,” too.

Want to be the next one to greet LV as “Lorenzo” in the Greenhouse hallways? Check out our open roles and apply here.